The Android OS is undoubtedly the world’s number #1 mobile operating system. This makes it necessary that any mobile app being developed, should have an Android version.And if you want to Convert mobile IMEI to model at Bestmobilenumbertracker for free While app developers may seem to be the heroes of the smartphone world, usability testers are as equally important, as we shall see.

The Need for Android App Testing

Usability testing for android app development is important as a means of ensuring a high-quality product. There are 2 major reasons for these tests, they are:

The Android OS is licensed and used by many manufacturers. This makes Android phones available with a wide variety of options, settings, designs and hardware specifications. Usability testing assures the smooth functionality of an app across these different devices.

As a smartphone operating system, Android is very heavily dependent on the display, for interactions with the user. This includes both user input and feedback. Testing ensures that an app will function flawlessly across different Android devices.

Each app is different, and may depend extremely on one resource or the other. In order to make sure that an app works as it should, certain important aspects of its interaction with Android is tested. These include:

This simply refers to how the app responds to user interaction on different devices.

This includes the testing of the app’s navigation, menus, settings, history, bookmarks, as well as the general flow of using the App. 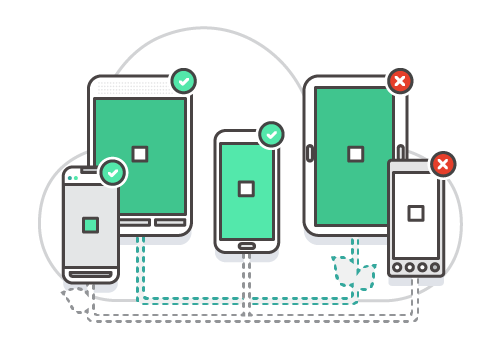 The app was designed for one or more specific functions, and it should deliver the desired results, without issues.

The app’s rate of memory, data, battery and even processor usage, is also tested to make sure that they all lie within acceptable thresholds.

This refers to testing how the app functions in a system with limited resources, like slow processor, low memory, or slow data transfer rates.

Security testing refers to how well the app protects user data,or any other sensitive information.

This test confirms that the app can be successfully installed on a wide variety of devices.

There are 2 basic methods of testing mobile devices, including Android smartphones. The first is manual, and second is automated testing. Manual testing involves a test of the system by a human, where one function after the other, is validated. It is best suited for testing a new or complex functionality. Automated testing involves the use of computer scripts to simultaneously conduct different tests across different devices. A test can also either be conducted directly on a physical device, or on a software emulation of it.

Following is the standard process of conducting an Android app usability test.

Step 1. Identification of the different devices and browsers to test.
Step 2: The use of both manual and automated testing, as may be suitable.
Step 3: Beta testing of the app by the client.
Step 4: Further tests as may be desired.

As you can see, usability testing of an Android app is very important. Usability testing makes sure that the end user’s interaction with the app is as pleasant as possible. It should be part of every app development process, because it makes Apps more valuable.